Monthly Musings: August At The Farm 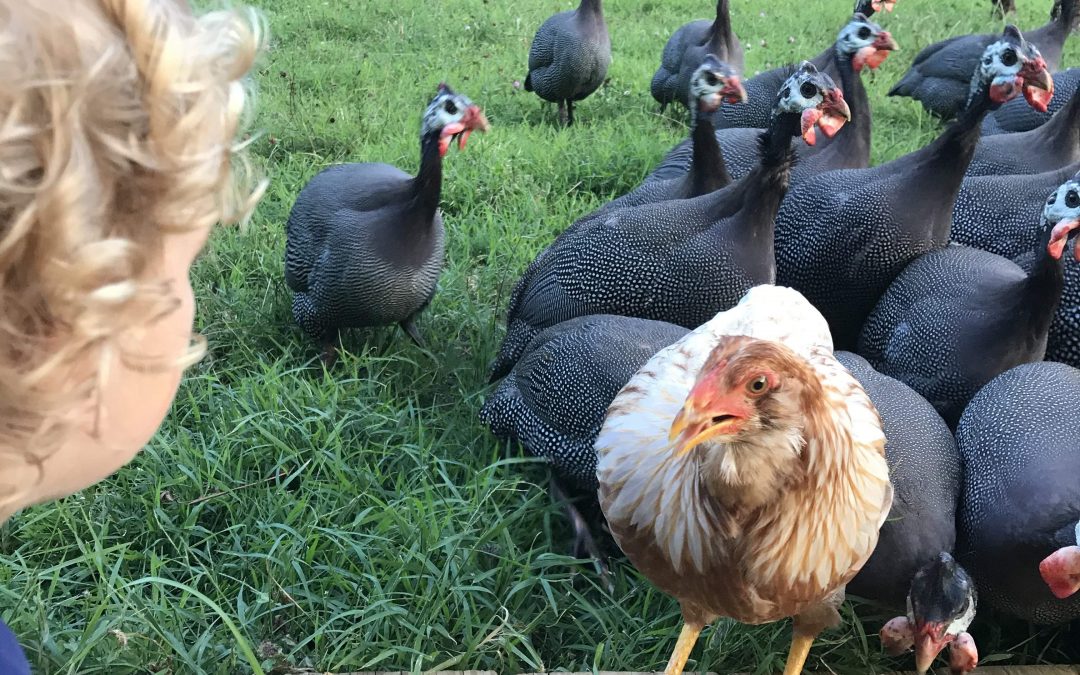 August is the time of year in which it can feel like things aren’t lining up. We’re still in the midst of hot and sweaty, moving animals daily, getting buried in vegetables and fruits from the garden and orchard, managing grass, milking twice a day and all that hot summer jazz. At the same time, we’re supposed to plant fall crops in the garden, to plan the sheep and goat breeding, buy in hay, clean out barns, prepare freezers and trips to the butcher, and all the other things that will need to be in place before it gets colder.

August is wild. August is full, overwhelming and hot. August tastes like peaches.

It’s a month of extreme abundance, lack of time and sunshine. 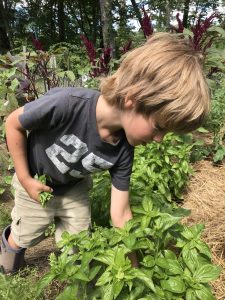 This year, it was also the month of unpredictable weather. In a 2 week span, we had two tornado warnings (both missed our valley, which is a blessing always, but particularly when you live in a tent) and a heavy summer storm. The storm blew us away. Two trees landed on the hay barn. A lamb got hit by something and we found her paralysed. A peach tree and our favorite pear tree lost main branches and won’t make it another year. All tall crops in the vegetable garden blew over. The blackberry bushes that were just weeded cracked down.

However, our tent was still standing, the other animals were doing just fine and so were we. We had a generous friend help us take the trees of the barn. We harvested the lamb in the backyard, with the help of a little boy that is just getting old enough to understand that ending the life of an animal deserves all the gratitude, gentleness and respect. He’s also old enough to be struck by the beauty of the animal’s internal organs and eager to learn of it all. We fixed the tent, were grateful and continued on. 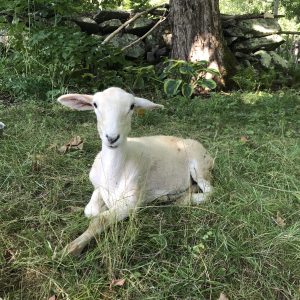 Emma the calf transformed from a sweet, soft nosed newborn into a toddler figuring out how to say ‘no’. She is not thrilled about a halter anymore, doesn’t stand for back scratches like before unless I don’t have time to scratch her and is thrilled by the discovery of her backward kicks. She also loves to nurse on the one side while I milk the other side of her patient mama Georgi, who I feel empathic and bonded with like only sleep deprived mothers of rambunctious toddlers can. Milking is still a daily joy, and marks the promising start of the new day and a winding down at night. 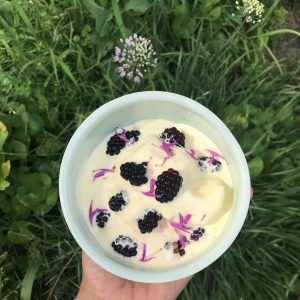 The sheep and goats that we put together as one group this past spring, finally seem to have warmed up to each other. Where for the longest time the goats would bully the sheep away from anything that seemed desirable, now I catch them hanging in the shade together as one big group and it’s a sweet sight. Running them together as a group saves us a lot of time, but it is also beneficial for the land. The sheep love grazing the lower grasses, the goats spurt to the rose bushes and goldenrods. After the few days they get to graze a paddock, it’s pretty evenly chomped down, ready for a long rest period and regrowth. 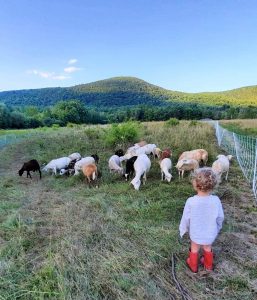 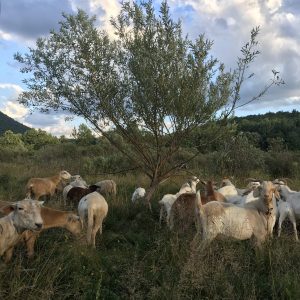 We plan on separating them again in the winter, the goats will need shelter a little sooner than the sheep, that we will graze on stockpiled grasses until the heavier snow falls. We also don’t want the horned goats to keep the more timid sheep away from the hay feeder. And in the last trimester of their pregnancy and right around the time their babies drop, it makes sense to be able to manage their minerals separately. But now in the summer, it gives me such joy to see those two species flocking together. We even catch them daily with birds sitting on their backs feasting on flies and mosquitos. When different species are managed well together, it all starts to make more sense.

During the last days of the month Dan turned 39, which we celebrated by eating peaches until we couldn’t move, planning a mushroom garden in the backyard, and letting him spend the afternoon mowing down a pasture we reseeded the day before. Celebrating your birthday as a parent of two little ones is a lot about letting others blow out your candles and unpack your presents, but they do so with so much delight that it’s almost better than the gift itself.

And so, August came to an end.  We are looking forward to another month of harvest madness, canning and dehydrating until midnight and slowly starting to feel a chill in the air on early mornings.